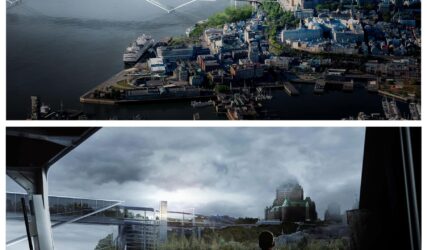 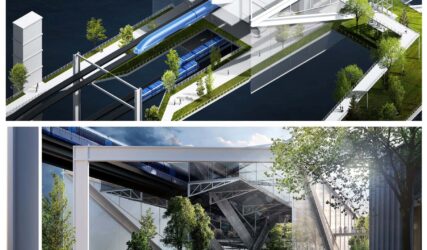 This project proposes to reinterpret the medieval inhabited bridge, which will become one of the keystones of a new system of rapid transportation on a local and territorial scale, questioning the connections between urban poles. Paradoxically, it’s a matter of accelerating travel to return to a certain slowness of lifestyles that were previously under the influence of the automobile paradigm. Located in a dense urban environment, this human bond refuses the automobile and allows the deployment of three modes of collective travel: magnetic levitation train, tramway and pedestrian movements.

The program is totally flexible and adaptive along the one kilometer bridge. A first programmatic series is composed of multimodal stations, a pedestrian and bicycle walkway, energy towers (hydroelectric and wind power), urban farms (food self-sufficiency). The bridge is then completed according to the chosen implementation strategies such as social and affordable housing, museums, schools, university pavilions, offices, hotels, covered markets, etc.

One of the elements structuring this public infrastructure is a pedestrian and bicycle promenade, an urban linear park. It allows users to experience a unique temporality, suspended fifty meters above the river. Vegetation swallows into the bridge and completes this experience between industrial architecture and recovered nature. This infrastructure of the future, which reinterprets the cantilever beams of its ancestors, becomes the support of human and collective communications, a green bond multiplying and diversifying the experiences of the city, a new symbol of the slow city.