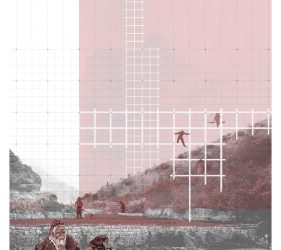 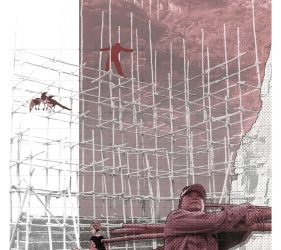 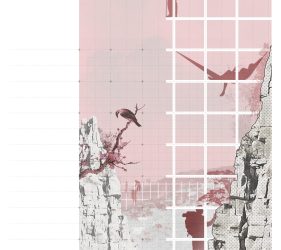 Through constant rewrites, landscape is permanently being redefined. Every mark expresses the dialog between the man y his environment over time. Marks‘ overlap hoards the landscape essence.

Site‘s potential is there, we only need proximity to rediscover it: to reach the mine again, each vestige and disruption, to feel the site… start to reinhabit it.

Three-dimensional structures, supported on minimal points, allow the reinhabitant to feel the proximity at the same time the landscape flows.

This structures work as an open and undetermined system: a three-dimensional strategy of incremental colonization. Like an infrastructure, a frame is configured and opened up for human life: to inhabit, refuge, observe, produce…

This ‘macro-scaffolding‘ works in a three-dimensional potential deployment, adapting itself to topographical singularities: to grow in the prairie, to climb in the mine slope, to hang over the valley or the water as a bridge…

The minimal impact is not only spatial but also material: three-dimensional grids are built in bamboo by the local constructive know-how. This hand-made and perishable infrastructure could be abandoned and colonized by nature, being assimilated throughout time: an ephemeral existence.

Maybe, reviving mines is no more than reach and rediscover it, feel the proximity: reinhabit it. 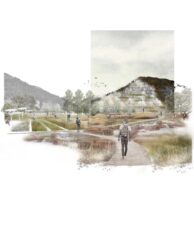