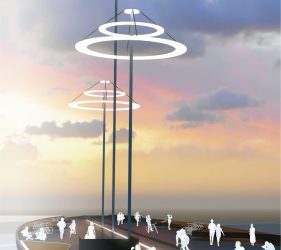 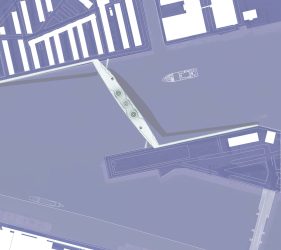 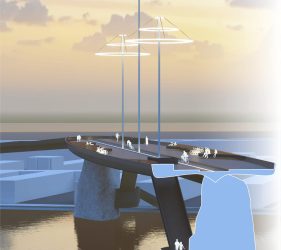 Riding a boat and cycling have nothing in common. So how about connecting the two most  popular ways of transportation of Dutch heritage, on a journey through time above river IJ?

Consequently, the bridge becomes a portal between two worlds: North Amsterdam and city center, respectively  the more recent bicycle as opposed to the foregone merchant ships.

Our proposal embodies the swiftness and rhythm of the veils of the XIXth century ships which is visible in the cross-section of the bridge.

The supporting system is made out of massive concrete pillars covered in rock-like shapes which remind people about the risks of a sailor’s life.

Also, the connection between the two river banks is visibly simple and efficient with two slopes that climb no less than 25 metres, while the area of the bridge is symmetrically divided and consists of a total of four routes: two for pedestrians and two for cyclists.

At the same time, providing the wider midsection we placed waves-like furniture for social areas as well as parking spots for bikes.

Finally, the bridge becomes a symbol, a landmark where people are encouraged to take walks, meet up with friends to watch the everyday show put on by the transits of the ships. 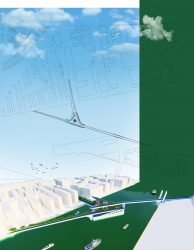