Khrushchyovka 2.0: portal to another dimension 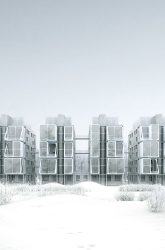 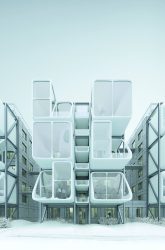 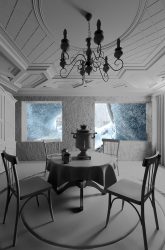 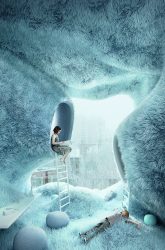 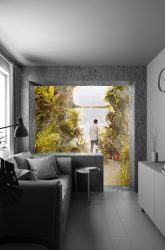 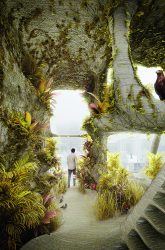 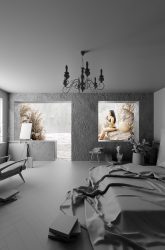 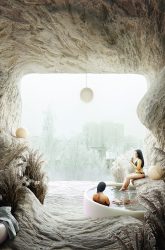 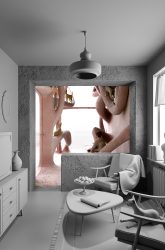 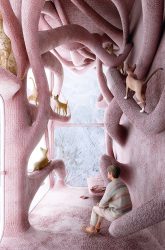 In 2021, more than 1.5 million Moscow citizens lived in Khrushchyovka – five-story prefabricated buildings from the 1960s. After years of attempts to introduce collectivism during the Soviet Union period, Khrushchevka was the first apartment typologies in Soviet period, which finally allowed citizens to own their private home. Today Khrushchevka is a part of our collective memory; there is hardly anyone who has never lived in such an apartment. Khrushchevka 2.0 is a multi-layered construction in which the future, the present, and the past are inextricably linked. This structure is constantly changing, like a living organism, and has incomplete form. The capsules form a buffer between the old building and its surroundings. The prototype of the capsules are the balconies and loggias, a space that is an external element of the building but belongs to the interior of the apartment. 9 square meters is the minimum subsistence per person, a parameter used in the Soviet Union for housing planning. The outer wall of the old building forms a border between this cell, where relics from the last century mixed with elements of Putin’s Russia, and the new capsule. The opening in the wall from the dismantled window becomes a pataphysical portal to another dimension, to a personalized space. The capsule is a pataphysical space that abandoned the Soviet’s housing planning principles. It is a projection of our personal desires and fantasies. The capsule offers an escape from routine and everyday life for every household.

Buildings built in different periods bear different responsibilities. Khrushchyovka was a building type developed to solve the problem of housing shortage. The old concentrated apartment is too compact, the unitary layout leads to a lifestyle without individuation. Family members are missing their personal space, and there is no extra room to cope with the growing needs of the new era.

Nowadays, as global natural environment becomes a critical issue, redevelopment of outdated buildings is an essential topic for architecture. The designer uses added capsules to create organic spaces grown out of the old apartments. These new spaces create essential environment to satisfy people’s need of personalized life, and to express personality and spirit of individuals.

Ensuring cultural diversity is vital for the continuation of civilization. And imagination is also an important source of power for the progress of human society.

This project seems to have come out of a time machine and plunged straight into the future. It is a very fascinating work on the private domestic dimension within a typology standardized down to the last detail. As good as a breath of fresh air.