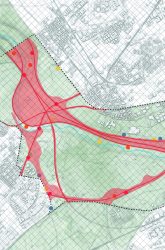 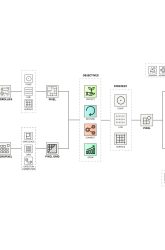 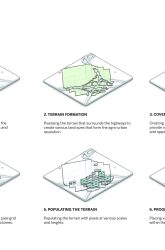 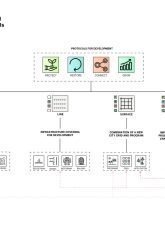 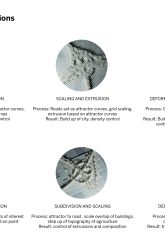 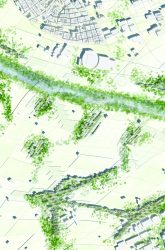 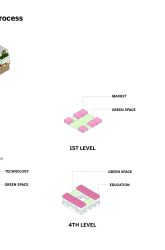 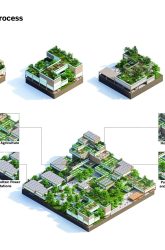 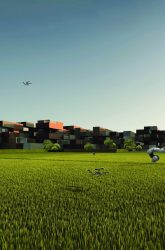 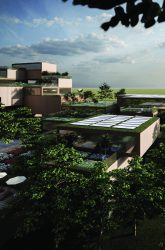 Agro_Pixelization: Fading the Boundary Between Urbanization & Agriculture is a project proposal for the agricultural park – Parc Agrari del Baix Llobregat, located just outside the metropolitan area of the city of Barcelona. The project aims to reconnect the park to the city by dismantling the traditional organization of city, industry and infrastructure. Furthermore this project aims to revitalize the agricultural park and scale up its level of production through the addition of more modern technologies.

The rapid expansion of urban development in the area has caused a conflict of interests. As a result, a hierarchy of land use patterns has formed, bringing agriculture to be at the bottom and causing reduction of scale and neglect of the agricultural park. The bordering urban areas have also created a tight barrier with highways and industrialization in between, reducing the the physical engagement of the park to the surrounding areas.

By incorporating a concept of point, lines and surfaces, and creating a pixel that derives from the problems and opportunities of the site, a grid system is formed that allows for developing site specific solutions to these challenges. With time the urban invasion is reversed through the project development system of protection, restoration, connection and growth.

Project Type: A high-tech agro-city that presents a model for how metropolitan areas and agriculture do not have to clash, but rather co-exist together to form a healthier urban environment.

Agro_Pixelization is an innovative and bold project using parametric methods to create a vision for a new combination of metropolitan areas and agriculture.