The Utopian side ( left side ), represents how the world might look like if there was never war. The development of technology was greatly influenced by wars, the internet for example was meant as a communication system for defence reasons. The industrial revolution as well as our focus on production was greatly influenced by our needs as “countries” to become stronger, and richer, therefore having more control. My idea was to show how humans would eventually come to the realization that earth is the most valuable resource for survival, buildings would instead take less space if elevated, and provide more living spaces for the fast increasing population. The number one priority would be food.

The Dystopian side ( right side ), represents how the world would look like if there was always war. Firstly, Infrastructure is none existent due to frequent destruction, therefore people would find a solution by moving below the surface for shelter, rocky regions would be utilized for maximum protection, cities have become smaller as well, the final remaining trees are avoided by all parties, in hope of concurring the area in the future. Continuous bombing, and attacks would lead to the instability of the earth’s crust, cause frequent lava flows which prove to be useful as a heating source since the dust covers the sun. old or no longer used rockets/ war planes would be utilized as above ground structures for maximum speed of construction. 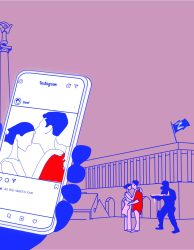