Monster, atrocity, excellence, trash, elegance, controversy, even a supermarket… A plethora of names defined Centre Pompidou since its inauguration in 1977. Some call it an architectural gem and others find it hard to digest. We choose not to pick sides in this debate and decide to emphasize one unequivocal aspect of Piano and Rogers’ design: the power it has on the Parisienne landscape. Even standing as a box on Rue Beaubourg, the building asserts dominance over Haussmann’s Paris. Our drawing deconstructs the object that is Centre Pompidou and therefore its urban hierarchy. The dialectical relationship between the city and the building dissolves and the monster becomes part of Paris.

“The idea of “De-centralizing” the prominent expressive structures is well executed in a captivating illustration. Beautifully harmonious approach to re-draw the “Monster”.“

“By pushing the elements out of the box, through the city, the drawing expresses the playfullness of Pompidou. It illustrates how much this building as been at first sight considered as an Alien but became finally one with its surrounding.”

“At first glance, a labyrinth of tunnels, halls, spaces connected like a monster that feeds on the city. Their colors and precise shapes, however, reinforce the nature of the Center Pompidou: a coherent and precise building. I like how this axonometric manages to bring out all the elements of the building.“ 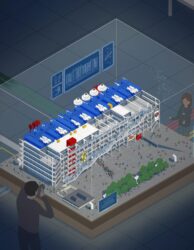 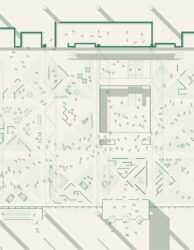 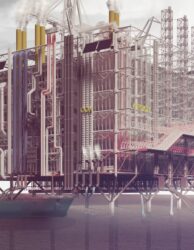 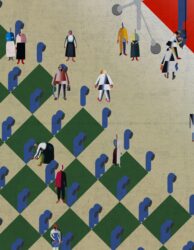