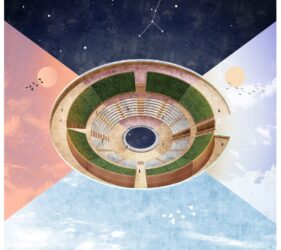 Earth Matter commemorates the all-encompassing and interconnected planet, environment and universe we co-inhabit and mutually depend upon. Site-specific, elemental, egalitarian and communal worldwide locations on public land bring people together to re-connect, re-appreciate and reflect upon the vast awe-inspiring mystery presently taken for granted. In contrast to monuments placed upon the Earth or on pedestals, a void of metaphoric layers of history is offered, inspired by the ways our ancient cultural roots reveal interpretative worldviews contemplating the cyclical patterns and attributes of the common source.

Oriented and entered through a ramp and steps along the Earth’s cardinal directions, with rammed-earth vertical walls and inclined stone seating surrounding a central reflecting pool, the sloped grassed perimeter offers, from the depth, a framed view accentuating the ever-changing and overarching sky-patterns above. The rising, mid-day and setting Sun, the Moon and other celestial bodies, along with the starry night constellations, re-introduce the primal source of our rich ethnic diversity. By reminding us of this shared cultural root-source, Earth Matter brings us together towards global unity and conciliation in order to address and resolve critical concerns, non-more vital than the unfolding crisis threatening to destroy the very source of our inspired imagination and life.