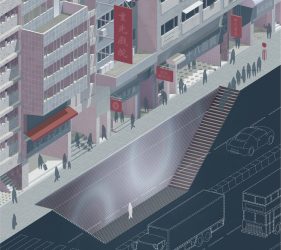 It was a gloomy afternoon on Nathan Road. Dom was walking along the crowded street after reporting to the police station following his bail, breathing the fresh air of freedom while he still could. As he walked along the street, he noticed a narrow strip of walk missing. The brick paving had been dug up, turning into a deep pit. Charred glass bottles arrayed on the walls, leaving a strong burning scent as Dom descended down the pit. The steps were paved with metal shells burnt into the bitumen. Tear gas shells. Molotov cocktails. This was a scene Dom had encountered, and eventually arrested countless times. The narrow, tall space immersed him into the pain and prides from his protest days. A few people paid tribute here as well, and the space was devoid of crowd noises in the city center – a solitary space to reflect on the tragic, violent protest and unrest throughout 2019/2020, and the crowd silencing National Security Law. As he walked up, he saw a melancholic juxtaposition: crowds chattering past the pit, lining up for the bus as if nothing had happened. They had tried so hard to forget, but lest we forget.