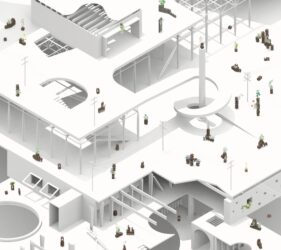 All monuments lose their grounds at some point in time, as we constantly rediscover values to locate a sense of belonging.

Ruminating over dreadful pandemic atop defective democracies and threatening ecologies, a monument common and concrete to all counters the often too static structures built to serve specific cultural identities. An intimate representation of our collective living realities, a monument is an agency for all forms of lives.

In conceiving monuments with such tenderness, we retrieve the gaze on “monument the object” and reiterate it as a placemaking organism. Superimposed on urban landscape, what becomes a monument is the functioning mechanism for growing, transforming and progressing. Formless in their natural state, these tiniest monuments temporarily adopt the composition of pre-formed soil, with seeds implanted in each. Attempted is a monument that collapses into soil to shape new ground, while a new leaf sprouting, invigoratingly breaking through dirt and awaking a fresh spectrum of entanglements.