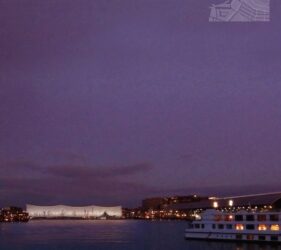 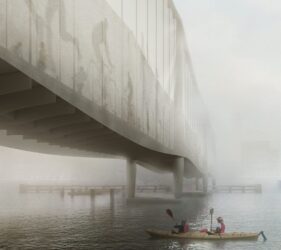 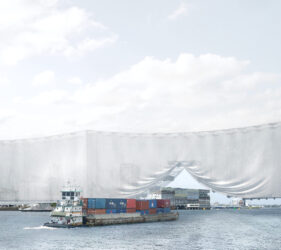 The bridge sets the scene

A mysterious bridge sits on the River Ij. The once familiar skyline of Amsterdam is now covered by a mysterious veil. A translucent drape gives glimpses of the city, but yet conceals it from the viewer.

As the sun rises, Amsterdam is gradually brought to life by the movement of commuters. Silhouettes of individual cyclists and pedestrians are amplified onto the facade of the bridge, unknowingly contributing to a joint performance. The commuters become the protagonist as they animate the river scene. Individual action transcends into a shared identity brought together by the bridge.

An unsuspecting vessel interrupts the scene – the curtain slowly lifts and clears the waterway, revealing the once hidden skyline of the city. Commuters hold their breath as they witness the dramatic entry of the antagonist. It suspends all movement as if time had stopped.

The vessel passes and the bridge lowers. The skyline is once again screened, and the commuter continues on their journey.