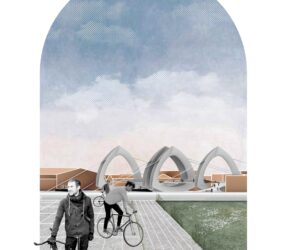 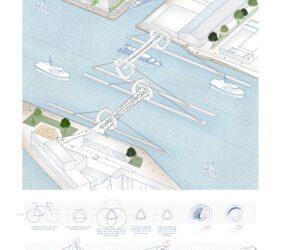 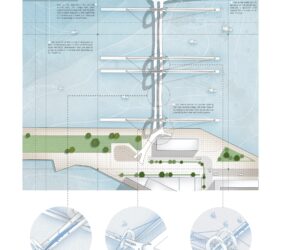 Amsterdam is a city known for its large number of cyclists. But it does not have a specific element to introduce this feature internationally. Therefore, in designing the bridge, it was decided that in addition to meeting the needs of citizens, a memorable place will be created to attract tourists. Therefore, it was decided to use a motion system that had not been previously designed and implemented to place more emphasis on the iconic nature of the bridge. Initially, it was inspired by the mechanism of motion of a bicycle. Move around the center point and on a straight line. Then the triangle shape was used in the moving elements due to the stable geometry. And by making changes, the triangle became a shape with rotational feature. By moving the triangles around two points, which is made possible by strong cables, the deck of the bridge reaches a suitable height for the passage of cargo ships. Due to high noise and traffic, the beginning and end of the bridge are located in places to have the least interference and disturbance with residential use, and on the other hand, there is easy access to the main cycling routes in the city. In the middle of the bridge, as the deck rises, a seating area is created towards the city view.