The Snake of Ij River 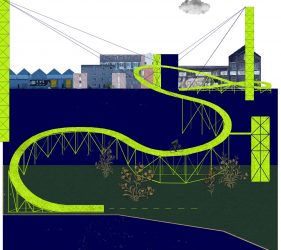 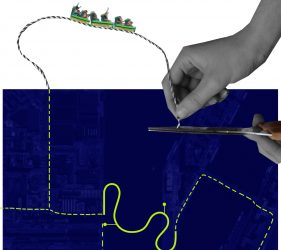 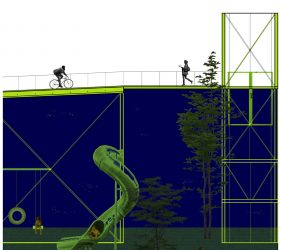 This project take source in a reflexion on the potentiality of water for developing recreational relationship between inhabitants and the city. In order to make this infrastructure accessible to all we ensure a constant fluidity of use and easy access (without any kinds of stops or waiting queue). This was done by expanding to approximately 5 times the Ij River width that resulted in a soft slope of 4% and reaching a maximum height of 30m for the passage of cargo ships.

The bridge connects two specific points of the bicycle road network and distort itself into wide curves, characterized by a long promenade playing with the different elements of this complexed area. It also allows two accesses from the ground by industrial lifts, shortening the course for a faster and easier crossing.

The bridge is inspired by rollercoasters, majestic metallic structures which evocates playfulness and has a strong imaginary impact. To emphasize this aspect, the bridge is supported by metallic truss over the ends and is relayed by two opposite truss pillars, suspended by cables towards the middle. Where the infrastructure runs over the docks, it hosts playground equipment for children and athletes, dynamizing the life of the waterfront.