Arms of the Gods: Embracing the Green Belt 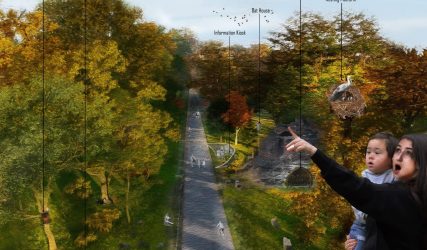 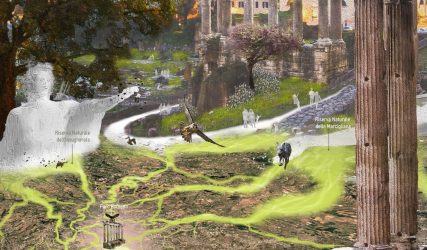 Within Rome’s green belt, there are over 6,500 species of plants and animals. Arms of the Gods connect to this biodiversity through a series of wildlife corridors that invite existing biodiversity in the green belt back into the city on both the macro and micro scale. The example corridor stretches along the historic Appian Way from the Roman Forum to Parco dei Castelli Romani. As the proclaimed “Queen of Roads,” the Appia Antica is a fitting location for a thoroughfare for native flora and fauna.

Micro-forests are established in a 100’ buffer on either side of the road between archaeological sites. In urban areas where a strict buffer is impractical, the buffer acts as a zone for concentrated urban forestry and wildlife habitat efforts. Forest restoration paired with pollinator intervention lays a foundation on which more species can be sustained. Additional interventions for carnivores including birds of prey and denning mammals encourage control of pest populations like boar piglets, seagulls, and rats.

Corridors increase commute options for residents and enhance beauty, while information kiosks educate users on wildlife. Arms of the Gods has the potential to become an icon of Rome where wildlife corridors become an element of daily life.