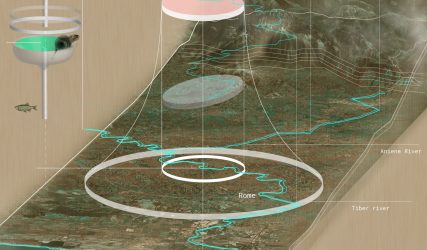 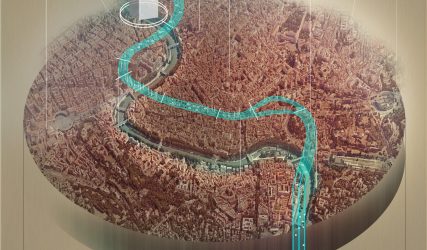 As life conductor, the Tiber river flows  from the Central Apennine mountains down to the Tyrrhenian Sea. On its way, The Tiber has both nurtured and flooded Rome, giving birth to a mythical empire through a perpetual rhythm of life and death staged in a legendary urban theatre.

The deployment of slim wire-like structures, floating in pendulant equilibrium on buoyant platforms along the Tiber creates a species exchange-system across the Region. Hydrawire generates an inhabitable, mobile network allowing species to migrate and nurture from different landscapes when climatic conditions provoke sudden migrations while linking aquatic and terrestrial food webs.

As a result, a fluent archipelago of diverse insular elements float in an animated landscape which serves as life support and linear corridor for an ecosystem that ranges from 2192mts down to sea level serving as hotline for many plants and animal species including Bearded vultures, Nutrias and aquatic animals.

These 2 images embody the embryonic stage of a system that adjusts to variable currents and future sea level rise with no impact on the river bed.  As buoyant chambers for life, these prolific micro-environments, would provide shelter and migration bandwidth for species to survive a rather sinister future landscape.