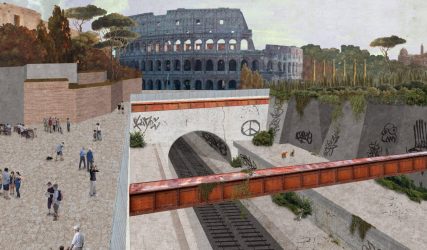 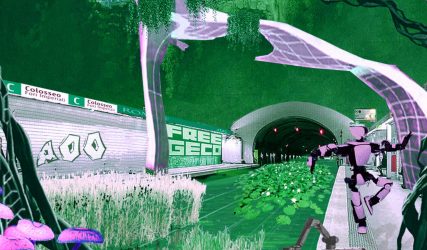 If Nature had a chance to live, Rome would be her first stop.  From the Roman ruins of the Palatinum to the abandoned unfinished buildings in the suburbs, Rome is a network of urban spontaneous hotspots of greenery and biodiversity. This is what makes Rome unique, and that is a pattern to be followed.

What can be the next spontaneous reclaimed spot of nature in the city? Tackling its biggest connector, the public transportation; its third Metro line under construction since the 1990s, and completion not around the corner.

Beginning from the Fori Imperiali Metro station, all the way to the front door of the Colosseum: an open box of unfinished concrete. What will happen with no intervention? What potential is there for this new, never-used part of Italy’s capital?

We toyed with the idea of the never-ending projects. What if there was no further development, or partially halted construction, what if this concrete box was left alone?  Will Nature conquer it? Would it start from a seed of wild grass or a colony of feral cats?

Answering this question is to understand Nature’s motivation. All we can predict is that in the future, it will be rediscovered, as a new, lush, semi-buried jungle in the middle of Rome.