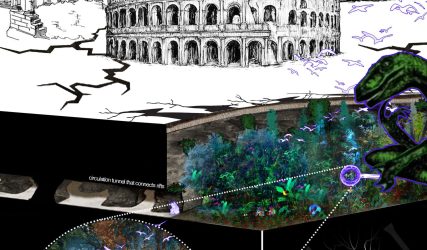 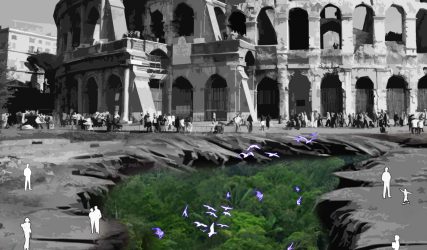 While discussing bringing nature to the city, first, we have to look into the context. Usually, in the big cities like Rome, the fragment of nature shows itself to us. It can even be a small rift. But what happens if those rifts were on a bigger scale?

The Rift discusses this situation, it takes the small scale of rifts and makes it huge. This way, spaces with fertile soil reveal and separate themselves from the city level which creates the appropriate environment for biodiversity to take shape and the whole rift becomes one living organism. this way, humans would not be able to interfere with the rifts, rather they will observe it from the distance just like they are in a museum so we can say that “no one gets in, no one gets out”.

In addition to that, those rifts are scattered all over the city; historic sites, unused spaces, industrial zones, etc. Between those rifts, there are underground passages for animals to travel from one rift to another. This way, circulation between the rifts would be provided.