Icon of Knowledge | the Next Generation of Data Centres 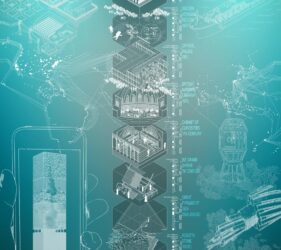 The ‘Traditional monument’ can be divided into two genealogies – the first is the ‘Functional-monument’ – a public hall used politically, economically, socially, or religiously, which presented by common ideals. The second is the ‘Functionless-monument’, such as tombstones and statues, whose purpose is to reflect a collective memory or heritage. In both cases, the object holds a formalistic cover and depends on direct integration with the subjects in order to gain a social-unification.

The 21st century invites revolutionary processes, fast-paced, unpredictable and difficult-to-understand. The fundamental challenge facing humanity is to demonstrate the ability to abandon old-fashioned and individual social patterns, and to dedicate oneself to technology – an infinite and abstract body, with the ability to bind and synchronize the world population.

Moreover, we are witnessing a trend in which society is losing the need, affinity, and dependence on materialistic expression to present its heritage.

Therefore, the accelerate transition toward a “Digital Society”, had pushed aside the needs of physical monument, which replaced by a functional infrastructure, consists of tangled grid-system lines and control-stations in types of Data-Centers.  The Data-centers stores in a physical way the “Big-data” – The new divine monument – an enigmatic space containing the human coding.