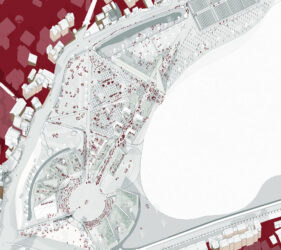 ‘The sacred conflict’ is a blend of land, power, and religion served with Kashmiri dressing, the aroma of nationalism and the aftertaste of violence. The region is densely packed, lacking civic and public open spaces- khanqahs and masjids act as hubs for socio-political discussion. Here, the Eidgah Maidan is witness to periods of calm and chaos; celebration-urs, and protests. As expression against the state is often suppressed, stone pelting, graffiti and violence take over, while traditional methods of resistance take a backseat- craft. The proposed monument aims at providing an autonomous public zone which acts as a link between the state and its people- allowing for active resistance- expression, objects that aid the process, and grey zones that act a spectacle in the city’s grain, demanding presence therefore attempting an inversion in authority.

Shehr-i-khaas, Downtown Srinagar- the organic nucleus of the city is an active belt of political activity. During protests, the town seizes to a halt- windows closed and roads blocked; bunkers, concertina wires, closed shutters, men with guns and teargas mist dominate the urban landscape. On other days, drunken walls lean on each other looking into streets which were once bazaars and karkhanas.