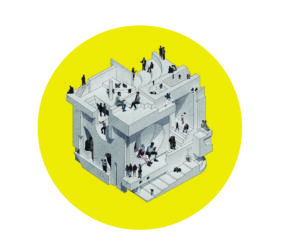 The People’s Pavilion is a public architectural sculpture, facilitating social integration of the plural inter-cultural society.

Today’s society is defined by the multiplicity of people and cultures: resulting in a globalized yet polarized world. Despite identity and society being fluid, we lost our social flexibility by individualism and tribalism. Polarizing in/out-group identity borders are segregating society, based on excluding ‘truths’ and references.

To design for plural, inclusive societies we have to change conventional pragmatic, economic, political and historical models, into the social-model. Therefore, we should acknowledge the plural society as a non-referential society; having no overarching truth. The social model is non-referential, merely based on society’s inclusivity.

Hereby architecture also loses its conventional excluding tools of reference, like history, culture, style, etc. This non-referential architecture manifests as self-referential, aiming for the essence of architecture: the experience of space, focusing on social exploration within the architectural environment.

A synthesis of universal architectural elements is creating socio-spaces, facilitating affordances of associative and responsive social activity-patterns. The architecture is merely marking the space; the people’s interaction is defining the temporary social use, scale and meaning of it.

The People’s Pavilion is facilitating and stimulating social exploration of the inter-connection in today’s inclusive society.