A world somewhere in The World 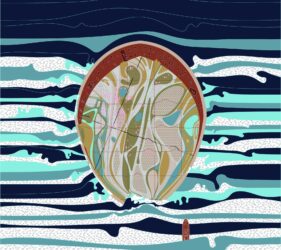 A monument is a representation of a paradigm of its time. In our times, people still have a strong sense of placemaking, of private property, of belonging, but this paradigm is shifting as we all are moving from place to place, from country to country, from culture to culture. Times are changing so fast that they do not take generations to fundamentally transform the societal DNA, but decades, and slowly it will take years, and then days, and then nothing. What will it be like to live in a world that is changing as fast as you are blinking?

A monument of these times that we’re living in now would be a fragment built in which time stays still.  Let us cut out a piece of the earth, trace a grid of paths and ways over this land, place it on a floating vat and gather some people ready to live here in this stillness until the end of their time, common people with the purpose of only living. Let them build their own houses in the walls of the vat. Then rule it down in all the planning rules around the globe, that wherever this place will float, it will not ever be inhabited by anyone else than them and will not ever be built on, more than it is now. And if there will be no people left on it, so be it. As this is a world floating in the World, and like all other worlds, it has a cycle with a beginning and an end, where humankind is just another drop in its continuous stillness.